5 Ways Industrial Waste is Costing you Money . . . and What to do About it! 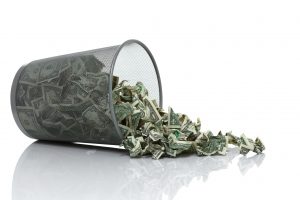 Some people may believe that disposing of industrial waste costs very little money as opposed to recycling it. In reality, this idea couldn’t be farther from the truth. It doesn’t matter whether you are dumping your waste in a landfill or recycling it properly, you will need to spend some money. Nothing good comes for free! Of course we here at KenBay prefer that you choose the more responsible option and recycle it. We have a zero waste initiative and encourage other companies to follow suit. It’s better for the environment, and helps save you money!

“Now wait a minute,” you ask, “Recycling is expensive! Isn’t it better for my company if I throw my industrial waste into the scrapyard instead of paying money to send it somewhere else?” You may think this is the case, but here are some hidden costs you might not have considered.

So the first question you need to ask is: who’s going to be picking up and hauling the waste? Because, unless technology has advanced significantly in the last 24 hours, we don’t have an army of robots to handle our trash. What we do have are flesh and blood humans, and those still need to be paid.

“Ok,” you say, “So I’ll need to hire some folks to handle my garbage. That’s fine, I’m sure they have families to feed.” That’s true, and now have you thought about how they will get the waste to the landfill? Because it’s doubtful that they will be walking the entire way. The cost of transport is also a factor!

“Well of course they’ll need to use trucks!” you say next. “It’s perfectly reasonable to pay for that.” That it is, but is it reasonable to pay for all that air you’re hauling around? Most of the time, industrial waste is just thrown into the truck. Think about what happens if you just throw clothing haphazardly into a suitcase. Are you able to maximize the use of that potential space? Of course not! It’s the same here: if you’re just throwing the waste on the truck, you end up paying for more trips to haul everything. This compounds the cost of the labor and transport as well.

Consider this also: the waste still needs to be “managed,” as it were. The process involves consuming resources. Energy is used. Water is needed. You still end up paying for this, every time you ship your waste off to a landfill.

As you can see, a lot of small hidden costs end up adding to a large money sink. By now, you’re probably wondering how much of your waste you can dump into that pond nearby before anyone notices. Unfortunately for you, the greatest cost of all is handling your waste irresponsibly. You leave yourself vulnerable to a lawsuit. It’s a time consuming process which can irrevocably damage your company’s reputation, on top of the costs for your legal team. Recycling doesn’t sound so bad now, does it?

Saving money and recycling is entirely possible. Just look at companies like GM, who save $1 billion a year through responsible waste management. “But I’m not nearly as large as GM, I can’t afford to start practices like that!” you (probably) just griped. That’s true, so why not try out a KenBay compactor? Our RotoPacs reduce the need for labor because they are portable and can be used on site. Additionally, crushing your waste and recyclables into cube shapes saves you money on transport. You won’t be hauling air when everything is stacked tightly into the truck! If you are interested in a KenBay compactor, you can try one before you buy it. Switch to KenBay, and find out how much money recycling can save you!