Cutting Down on Cardboard Packaging 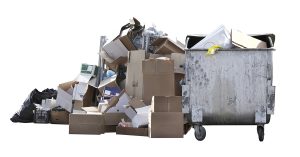 An animal health care company, one of the world’s largest producers of medicine and vaccinations for pets and livestock, recently began using a KenBay RotoPac industrial trash compactor for compacting their packaging waste.

END_OF_DOCUMENT_TOKEN_TO_BE_REPLACED

Challenge: Duracell, the well-known battery maker, was using a vertical baler to crush industrial Super Sacks at its South Carolina location. The Sacks came to Duracell containing a black dust ingredient for producing their batteries. The Sacks no longer had a use so they were being baled to reduce the cost of hauling for disposal. However, as the bags were crushed in the baling process the black dust was being dispersed into the surrounding area. This caused a serious hazard problem to the workers. Duracell needed a cost effective way of containing the dust and keeping the bales from creating a black trail as they were transported to an outside dumpster.

Solution: Through an internal search of their parent company Procter&Gamble, the KenBay RotoPac industrial compactor was found to be used for compacting waste in polyethylene bulk bags in another location. Duracell learned that by merely placing a steel hood over the RotoPac, the dust could be contained as the Super Sacks were compacted into the bulk bags. Since the polyethylene bags could be easily sealed when filled, they could be transported without the dust causing a problem.

The RotoPac compacted approximately 80 dusty Sacks into a single bulk bag forming an approximate one meter cube, ideal for ease of transport. No longer did the compacting of the Sacks have to be performed in a separate room. Since the RotoPac has a footprint slightly larger than a standard pallet, the compacting of the bags could be done in the corner of a storage room. Another benefit achieved using the RotoPac was by customizing its input and extraction of the filled bag, making the process much safer.

Benefits: Increased safety, reduced hauling costs, and the elimination of the need for a separate room to compact Sacks. In all, a cleaner working environment.