3 Surprising Ways Landfill Gas Can Be Put to Good Use 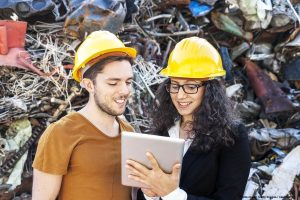 So, you throw away your garbage, it’s picked up by a waste management company, and then it’s delivered to a landfill where it sits to rot into eternity, right? Wrong. Allow us to introduce you to landfill gas. The life cycle of your garbage doesn’t end when it’s dumped at the landfill. Instead, once there, the decomposition of solid waste begins to produce methane gas. What’s methane gas? A colorless, odorless, gas that is all around you. It’s also a by-product of garbage decomposition. And, it can be put to use in surprising ways.

Why is this important? Because, according to the United States Environmental Protection Agency (EPA), “[c]onverting LFG to energy offsets the need for non-renewable resources such as coal and oil, and reduces emissions of air pollutants that contribute to local smog and acid rain.” And, that’s something we can all appreciate.

How Landfill Gas is Used

Methane, also known as landfill gas, can be captured in landfills and converted into a useable energy source. Instead of vanishing into the air,  a system of wells, blowers, or vacuums collect landfill gas and take it to a processing facility. Depending on the facility the landfill gas is delivered to, it will be put to use in different ways. Here are a few of them:

In the United States, most captured landfill gas (about 75%) is used to generate electricity. The landfill gas to electricity process starts deep inside the pile of waste. To collect the gas, a vacuum-like blower captures it from the center of the garbage heap. After that, the gas is transported through a pipework system from the garbage heap to a processing facility, where it is transformed into electrical energy. Typically, the electricity created at landfills is used on-site, but it is also sold to the grid for general use.

2. Direct Use as Thermal Energy

Landfill gas is also used to offset, or replace, the use of other types of fuel. Instead of natural gas, coal, or fuel oil, landfill gas can be used as thermal energy. This fuel is utilized in boilers, dryers, kilns, greenhouses, and other machines that rely on thermal energy. Landfill gas can be used to fire pottery and glass, heat water for aquaculture (fish farming), and warm greenhouses. Other industries that currently use landfill gas include auto manufacturing, chemical production, food processing, pharmaceuticals, cement and brick manufacturing, wastewater treatment, consumer electronics and products, paper and steel production, and prisons and hospitals.

Whether your business has made the switch to zero waste, or it contributes to the production of landfill gas, we know waste management can be a burden. Because trash compactors will reduce the weight and size of your waste, they are a great way to cut down your waste removal costs and improve the efficiency of waste management.

Don’t let something like a waste get in the way of your business operations.  If you’re interested in trash compactors or finding a committed consultant to help you reduce your waste, call KenBay. We can tell you more about our services, no matter what industry you’re in, or how much waste you are creating!